The National Football League’s (NFL) petty 2012 lockout dispute with the NFL referees union has officially ended. Not a moment too soon: The “real” referees will return to officiate all Week 4 games – just in time for the early Thursday Night game – rescuing the rest of the football season from further tarnish, embarrassment and harm at the hands of incompetent replacement referees. 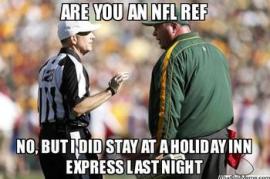 Before the 2012 season began, players and analysts warned NFL Commissioner Roger Goodell that the poorly qualified fill-in referees would lose control of football games. They did. The rightful outcome of games would be altered by poor calls and non-calls. Oh, were they ever. And repeated failure to call serious personal fouls would put players at needless heightened risk of serious injury. Sadly, and most unacceptably, that happened as well.

I thought, what other organization, #1 in its field, has ever made such a major non-forced mistake, causing highly visible, self-inflicted harm? My answer rewinds back to my freshman year, Intro to Business, first case study: Schlitz Beer in the 1970s. Once the #1 beer in America, as equally an iconic brand as Budweiser, Schlitz proceeded to lose nearly all of its value by that decade’s end, thanks to inexplicable, self-induced sabotage of its own product.

The NFL’s decision to install replacement referees was a “Schlitz Mistake.”

1965 Schlitz ad. The company clowned around with its formula a few years later. Image courtesy AdClassix.com

The Schlitz beer you might see in stores today is brewed by Pabst, Schlitz’s owner, matching the 1960s original formula some folks still feel nostalgia for.

It is not to be confused with the disastrously reformulated version of the early 1970’s, the brainchild of then-company President and Chairman Robert Uihlein Jr., who, apparently frustrated by Budweiser’s success, decided to expand production while boosting profits by making Schlitz beer quicker through a faster brewing method with cheaper ingredients – moves that today’s microbrewers in particular would regard as absolute heresy.

This article provides an excellent run-down of the grim details of the devolution of Schlitz’s beer quality and revulsion from once loyal customers. Some people reported experiencing headaches from drinking the new formula. Things got even worse when the beer started to react while sitting on store shelves, generating ‘floaters’ – or worse, chunks – in the beer.

Schlitz had basically trashed its own business by the end of the decade, culminating in a fire sale of what was left of the company in 1981.

The knuckle-headed decision by NFL suits to retain inept substitute referees is not unlike Schlitz messing with its beer formula that had spanned generations. They both serve as stark reminders of a basic business and product management lesson: One of the biggest enemies of any organization is past success.

Success can lead to an implicit assumption that self-serving changes that diminish your product or service will either go unnoticed or shrugged off by customers assumed to remain permanently as customers anyway. Wrong. Of course your customers will notice. No organization’s success is unalterably permanent.