Ludwig Bemelmans’ classic children’s book Madeline has been enjoyed by generations of kids — my daughters included. The story also has an important lesson on “knowing what you don’t know.”

In Madeline, Miss Clavel, the teacher and caregiver of twelve little girls in a Paris boarding school, suddenly awoke one night sensing trouble:

In the middle of the night
Miss Clavel turned on her light
and said, “Something is not right!”

Sure enough, she found little Madeline crying in her bed, in pain from appendicitis. Of course, all turns out well, thanks to Miss Clavel listening to her personal sense that something was not right.

Having frequently read Madeline to my daughters years ago, that story came to mind while reading Know What You Don’t Know: How Great Leaders Prevent Problems Before They Happen, the first of many excellent books by business professor Michael Roberto.

Perhaps one of the most troubling causes of unseen problems mushrooming into catastrophes noted in Roberto’s book is an organizational culture that pooh-poohs intuition in favor of hard data:

Some organizations exhibit a highly analytical culture [to the point that] employees may self-censor their concerns.

In one case, a manager told me, “I was trained to rely on data that pointed in the opposite direction of my hunch that we had a problem.”

The manager’s hunch was correct; there was indeed a serious problem. And yet, the manager, “relied on the data and ignored that nagging feeling in my gut.”

Roberto drives this point home with a medical crisis spanning hospitals across the US: Troublingly high levels of cardiac arrest among admitted patients. One study found hospital personnel who observed some advance warning sign(s) of cardiac arrest alerted a doctor only 25% of the time! Why? Nurses and other staff often felt a Miss Clavel-like sense that “Something is not right” with a patient who was indeed nearing cardiac arrest, based on a personal observation, such as a change in the patient’s mental condition, or a higher level of fatigue or discomfort — but with no accompanying change in patient monitoring levels — so the concern is effectively ignored in favor of the patient’s quantifiable data.

The consequences of a hospital culture that unwittingly encourages caregivers to ignore their intuition are high. Once the window of opportunity to avert cardiac arrest closes, a life or death “Code Blue” crisis is at hand.

As Roberto’s hospital case study illustrates, a gnawing sense that “Something is not right” should not be ignored, but rather recognized as an alert that you probably do not have all the facts, but just some of the facts — that is, you don’t know what you don’t know.

Recognizing this issue, many hospitals have implemented new Rapid Response Teams that have sharply reduced Code Blue incidents. Nurses and staff are actively encouraged to report observed changes in patient affect, reported symptoms and other concerns, even if they are not supported by patient data. Once notified, the Rapid Response Team will arrive at an affected patient’s bedside within minutes and actively diagnose whether further testing or treatment to prevent a cardiac arrest is warranted. Unlike a Code Blue team that “fights the fire” of a full-on heart attack, Roberto writes, a Rapid Response Team “detects the smoke” of a potential heart attack.

Traditional data warehousing and data analytics vendors often present their solutions as a way to make decisions ‘based on objective facts’ rather than relying on ‘emotional gut feel.’ The problem is, however, the known ‘objective facts’, the known ‘hard data’, may not provide a complete — or even accurate — picture of what’s really going on. For example, structured data sources generally cannot on their own integrate vital additional business signals often buried within such text-based information sources as field reports, knowledge bases, wikis and other documents.

So, listen to your gut, your intuition, as a signal that you need to dig deeper into the matter at hand. Actively seek out further information beyond the hard data available to you. Compare that information with your hard data and “connect the dots” for a far more complete picture, which may well yield surprising new insights.

What I find exciting is that unified information access is playing a vital role in empowering managers and leaders to connect those dots between data and other silos of information to realize those critical new insights.

Unified information access integrates, joins and presents all related information — structured data and unstructured content alike — to complete the informational picture and significantly expand what organizations “know” to determine with confidence whether “Something is not right.”

I am pleased to mention I have posted my first article on the Attivio Unified Information Access Blog, in which I discuss a parallel I see between people who have superior autobiographical memory – the extraordinary capacity to recall specific events from one’s personal past – and the need to combine objective (structured) data with subjective insights (drawn from unstructured content) to gain true understanding, “see the big picture” and avoid getting distracted by unimportant details.

Here is an excerpt:

The Gift of Endless Memory, a 60 Minutes story originally broadcast on December, 19, 2010, introduced viewers to emerging research on superior autobiographical memory – the extraordinary capacity to recall specific events from one’s personal past. The story featured five of the six people recognized by researchers as having this superlative level of memory, including actress and author Marilu Henner…

I would have liked to have learned much more about how each group member actively uses their memory to their benefit. How does each person effectively manage what amounts to a vast personal “database” of highly detailed memories, each one as vivid as any other, regardless of the passage of time? 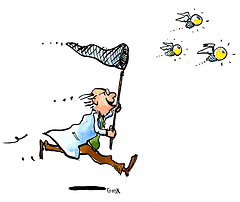 In a recent thought-provoking TDWI article, David Champagne informed readers of The Rise of Data Science: a discipline of emulating the scientific method when analyzing data, in a conscious and laudable effort to ensure objectivity and avoid poor analytical practices.

As I had just recently blogged on the Texas Sharpshooter Fallacy, a type of flawed analytical logic business intelligence users might fall into, David Champagne’s article caught my attention.

Back in the “good old days,” data was the stuff generated by scientific experiments. Remember the scientific method? First you ask a question, then you construct a hypothesis, and you design an experiment. You run your experiment, collect and analyze the data, and draw conclusions. Finally, you communicate your results and let other people throw rocks at them.

Nowadays, thanks largely to all of the newer tools and techniques available for handling ever-larger sets of data, we often start with the data, build models around the data, run the models, and see what happens.  This is less like science and more like panning for gold…Perhaps the term “data scientist” reflects a desire to see data analysis return to its scientific roots…

Barry Devlin, in his business-focused commentary on David Champagne’s article, noted the worlds of science and business have rather different goals and visions, which I interpreted as data science might offer limited benefit to business managers.  But perhaps the best practices of data scientists have a lot more in common with those of business managers after all, in light of some commentary I came across on effective business decision-making.  That commentary gave high praise to the manager who utilizes the scientific method in the decision-making process. The author was not a technologist, but rather: Peter Drucker, the father of modern business management.