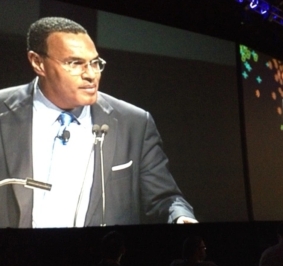 In 2010, I was remote director of marketing for iStrategy (now Blackboard Analytics) based in Maryland. The company hosted its first-ever iStrategy User Conference that year, hosted at Loyola University. It was a pleasure to meet so many smart, enthusiastic data warehousing customers I had been collaborating with on case studies and webinars, highlighted by a fantastic keynote presentation by UMBC President Dr. Freeman Hrabowski.

Flying into BWI that September and back home in October on AirTran (a nice airline that I miss, btw). I had happened to read the September and October issues of Go, AirTran’s surprisingly good in-flight magazine. I found it interesting that the business author profiled in each issue so thoroughly and diametrically opposed the other.

George Cloutier, the founder of American Management Services, with a long record of successful business turnarounds to his credit, is the author Profits Aren’t Everything, They’re the Only Thing, profiled in the Go September issue. Meanwhile, the October issue of Go profiles the book ESPN the Company: The Story and Lessons Behind the Most Fanatical Brand in Sports by longtime consultant to ESPN Anthony F. Smith (scroll about halfway down each of these links to read each book and author profile).

How is this for disagreement, not to mention two very different personal brands, as summarized by Go magazine:

George Cloutier: I am Your Work God! You want your employees to do what you say, not what they think.

Anthony F. Smith: Avoid the myth of single-person leadership. “Leadership is really a shared phenomenon…(Each ESPN executive) needed to surround themselves with other effective people who could fill in areas where they were not as skilled.”

END_OF_DOCUMENT_TOKEN_TO_BE_REPLACED

I read a great blog entry entitled Critical Thinkers vs. Critics by Mark Logic CEO Dave Kellogg. (Quick aside: Any blog by a CEO/Chairman/Founder that is regularly updated and features plenty of wisdom, wit and insight is evidence that company has a competitive advantage in leadership. Good on you, Dave.)

Dave Kellogg raises the important difference between a “critic,” a person who criticizes everything, generally without proposed solutions” and a “critical thinker,” a person who attacks ideas in the spirit of making them better, and who can hold both sides of an argument in their head at once.”

Point very well taken. I’d additionally define a critical thinker as someone who will also not allow herself/himself or others to fall victim to “paralysis by analysis.” Even more importantly, by virtue of being unafraid of taking a hard, unbiased look at issues and listening to others’ opinions, concerns and doubts, and in fact welcoming such open discussion, a critical thinker is also an optimist by nature.

I like how Dave assesses the level of critical thinking applied in the crafting of successful marketing positioning (emphasis added):

Critics “attack” other people’s ideas but not their own. Critical thinkers “attack” everyone’s ideas, especially their own. For certain disciplines (e.g., marketing positioning) one of my primary tests is not to examine the substance of a proposal, but instead to examine the critical thinking in the process that led to it [for example, reviewing a marketing proposal recommending a new company tag-line]:

As David Ogilvy once said: “good writing is slavery” (see page 33 of Ogilvy on Advertising). So is good positioning. And it comes from critical thinking and plenty of it.

I think delving into the multiple meanings of Dave’s word “attack” is important here, too.  A critical thinker will indeed “attack” an idea much differently than a critic. There is a world of difference between “attack,” as in how a critical thinker will “earnestly initiate” a rigorous debate of an idea, in such a comment as, “The European sales team will have concerns about the time they will need to devote to the new product. Let’s work out how we can address that concern and ensure they will have time to complete their deals in the pipeline,” versus how a critic might truly “attack,” as in, “beat down,” an idea with a discussion-dampering remark:  “Oh, the European sales team always marches to their own drummer. Mark my words, they will ignore the new product. I’ve seen it before.”

How to effectively deal with the “critic” is addressed in author Bruna Martinuzzi’s article on optimism, which she kindly allowed me to republish on this blog. Bruna accurately identifies the behavior of the “critic,” aka “devil’s advocate,” as symptomatic of general pessimism, which can discourage critical thinking:

END_OF_DOCUMENT_TOKEN_TO_BE_REPLACED

I very much want to share a live presentation that especially resonated with me, and no doubt for those who had the good fortune to be in attendance: a TED talk by Barry Schwartz appealing for wisdom in the workplace and beyond.

The good news is you don’t have to be brilliant to be wise. The bad news is that without wisdom, brilliance isn’t enough. It’s as likely to get you and other people into trouble as anything else. — Barry Schwartz

I reflected on Barry Schwartz’s fine presentation from a business intelligence perspective. Consider Barry Schwartz’s compelling example of janitors who modify or skip their usual tasks for the benefit of patients and their families. Now imagine a supervisor, relying only on the numbers from time and attendance reports, who might reprimand these janitors for not completing their work tasks in a timely manner (rule enforcement)! Similarly, consider a supervisor, again relying on reports, has the epiphany to offer a wage incentive for janitors to complete their tasks ahead of schedule.

In both cases, supposedly justified by business intelligence, rules or incentives might be enforced that unwittingly discourage janitors from performing their tasks with empathy and in the long run will have a detrimental impact on patient care…